California on fire, and can plants think? Books in brief

Upon discovery that the Boquila trifoliolata is capable of flexible leaf mimicry, the question of the mechanism behind this ability has been unanswered. Here, we demonstrate that plant vision possibly via plant-specific ocelli is a plausible hypothesis. A simple experiment by placing an artificial vine model above the living plants has shown that these will attempt to mimic the artificial leaves. The experiment has been carried out with multiple plants, and each plant has shown attempts at mimicry. It was observed that mimic leaves showed altered leaf areas, perimeters, lengths, and widths compared to non-mimic leaves. We have calculated four morphometrical features and observed that mimic leaves showed higher aspect ratio and lower rectangularity and form factor compared to non-mimic leaves.

Most textbook definitions recognize only animals as having nervous systems. However, for the past couple decades, botanists have been meticulously studying long-distance signaling systems in plants, and some researchers have stated that plants have a simple nervous system. Thus, an academic conflict has emerged between those who defend and those who deny the existence of a nervous system in plants. This article analyses that debate, and we propose an alternative to answering yes or no: broadening the definition of a nervous system to include plants. We claim that a definition broader than the current one, which is based only on a phylogenetic viewpoint, would be helpful in obtaining a deeper understanding of how evolution has driven the features of signal generation, transmission and processing in multicellular beings.

New books by Suzanne Simard – Finding the Mother Tree: Uncovering the Wisdom and Intelligence of the Forest 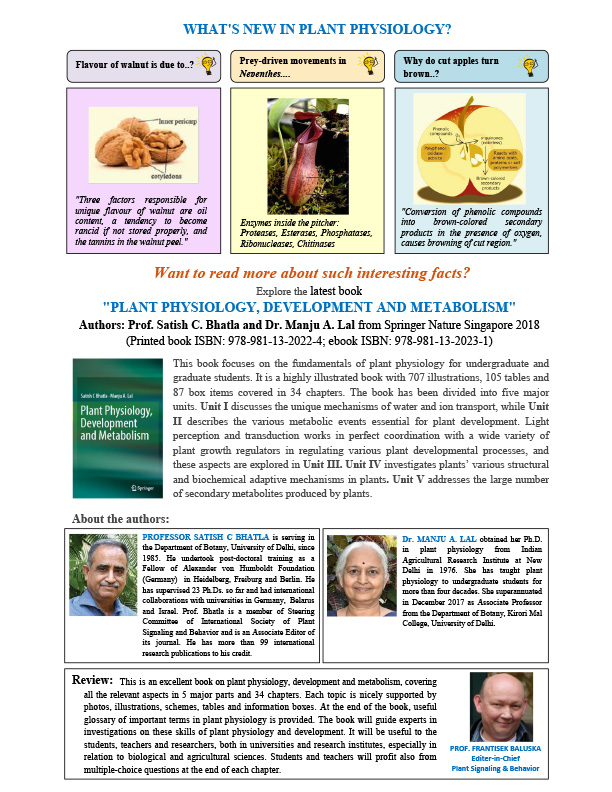 Flowers Anticipate Revisits of Pollinators via Memory Based System

Stamen presentation in Nasa poissoniana (Loasaceae) flowers is based on previously experienced pollinator visitation intervals. Using the unique ability of fast and precise stamen movements in response to a previous experiences with pollinators. Flowers of Nasa poissoniana are able to perceive, record and memorize  visitations and adjust their flower behavior based on previous experiences. In other words, flowers anticipate revisits of pollinators by learning from previously experienced visitation intervals.